No. I'm not kidding.

Today, I got up, washed my face, put my contacts in, and put on a Wisconsin shirt for the 500th day in a row. I haven't worn them every second of every day, but I have worn at least one every day for the last 500. I don't think it would be such a big deal, except that I'm 37 years old, have two kids ... and live in Minnesota. By now, most people that know me, know that I wear Wisconsin almost all the time - and many of them have now asked, "What's the deal with the Badger shirts?" It's becoming harder to explain - and easier sometimes, too. If I just happen to say, "I've worn a Badger shirt for the last 500 days," then they seem to think I'm nuts and leave the conversation alone. However, a follow-up question of, "Why?" gets into an entire different story.

Five-hundred days ago, I was the head baseball coach at a local high school. I wasn't in such a great mood. We won two games in my last two years. So winning wasn't putting a smile on my face. And, even though I did work with some great kids, a few of the bunch spoiled the lot. I decided to do something to make me feel better: I started wearing Wisconsin shirts. Smile. I'm a badger. Always have been. Always will be. I grew up around Madison. My grandma and grandpa worked on campus. I even ended up graduating from UW-Madison. And married someone who grabbed two degrees from the University of Wisconsin, as well.

Today is 500 days in a row. I try to wear one all day, but often end up wearing two or three on any given day. I have also worn Badger shorts, pants, sweatshirts, hats, jackets, and coats. And though the 'shirt' streak didn't make it into the church for a wedding, a tie did take it's place - after I wore a Wisconsin jersey for the first 8 hours of the day. The streak has journeyed from Minnesota to South Dakota, Wyoming, Colorado, Missouri, Illinois, Iowa, Indiana, Ohio, North Carolina, Arizona, and - of course - Wisconsin. It has been to major league baseball games, NFL and college football games, NHL contests, state and local fairs, high school activities of all kinds, dance recitals, gymnastic shows, and a myriad of family events.

As I referred to above, I won't wear one into church or allow a shirt to substitute for an official uniform while I'm coaching. But, I will wear one of my 40+ Wisconsin/badger shirts for anywhere from 4-24 hours each day. I attempt to make it through at least eight hours each day - so, it is like a job, in that sense, anyway. I've gotten mentions and retweets on Twitter because of the streak - especially when I got close to a full year this past spring. And I even got a nice write-up in the April edition of "Badger Voice" (http://www.uwalumni.com/home/voice_april12_shirtstreak.aspx). My school (UW-Madison School of Education) recognized the streak and sent me a t-shirt and car sticker this past string. And my birthday present to myself the past two years has been a 'The Red Shirt' each year (first the 4th edition, and then the 5th edition).

I don't know how long this thing will last - or even why I keep going. All I know is that being a Badger is a big deal to me. And I honestly don't know what will happen once the streak is broken. Today is 500 days and I'm not sure whether I'll make it to 731 (two years - with a leap year in there), 1000 or more - or less. But I know why Abe Lincoln sits in front of Bascom Hall. I know all the words to 'On Wisconsin', as well as what 'Sifting and Winnowing' means. I know that Bucky's full name is Buckingham U. Badger and that the Slab of Bacon came before Paul Bunyan's Axe. I know that Camp Randall was a military training camp during the Civil War and that the arch depicts an enlisted man as well as an officer. I know that it's called a 'motion W' and that the 5th quarter will come after every home football game - and that it doesn't mean there's OT - but that it will be a celebration - win or lose. I sing 'When you say Wis-consin, you've said it all' when 'the Bud Song' plays. I will forever bleed red and white, jump around at the start of the 4th quarter, and sway back and forth and wave my arm to 'Varsity.' And I will always - ALWAYS - be a Badger. 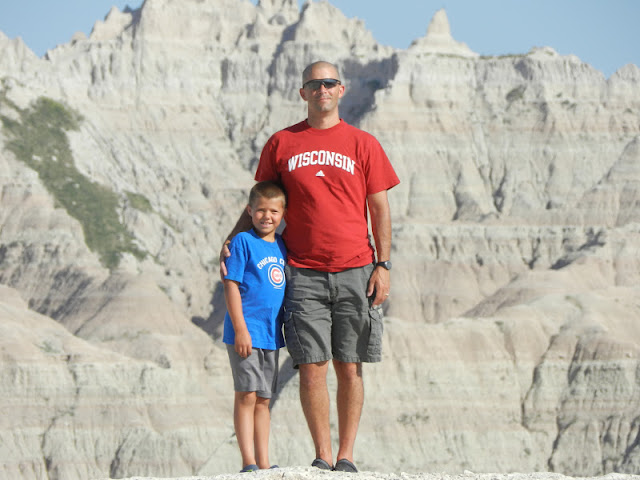