I touched the axe! 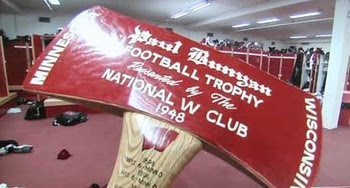 Yes. That is right. Sat seventh row, 45 yard line in some Gopher season ticket seats at TCF Stadium here in Minneapolis, MN. Watched the University of Wisconsin throttle the University of Minnesota footbal team. Then, after most of the fair-weather Gopher fans had left, I waited and watched as the Badger players carried Paul Bunyan's Axe to both goal posts and "chopped" them down. They then proceded to parade the axe around the walls of the stadium - and let fans touch it. I almost didn't get to touch it, as one Badger decided to detour back over to the visiting sideline. Thank goodness for Chris Borland - who stepped in, stole the axe, and made sure those of us hanging over the wall behind the Gopher bench got our own chance to touch the rivalry's most famous item. Having won the Border Battle in football eight consecutive times, and having personally watched it the last two (one in Madison, one in Minnesota), I can honestly say it never gets old. 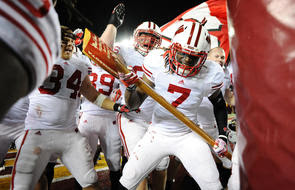