I'm a health educator and fairly responsible (and knowledgable) parent ... however, logic leaves me when I try not to make a connection between making a late night of it on Tuesday with my son at the Twins game and him feeling sick for the rest of the week.

Since my wife's parents are in town and hadn't been to Target Field yet, I ordered some tickets for their visit. As chance would have it, my son ended up having a baseball game of his own scheduled for the evening. Mother nature took care of us, though. It rained heavily during the day - cancelling my son's game. Thankfully, Target Field does much better with rain - especially with a tarp covering the infield - so, the Twins game went on as scheduled.

We drove down to the game through the rain, but just as we pulled into our parking spot the rain stopped, allowing us to enjoy a 5-0 Twins win on a gorgeous night. It was bit damp and chilly - enough to have on a sweatshirt and hat - but we really enjoyed the game. The three girls headed back home after the 7th, while us boys (including my son) stayed the full nine, making it back home for bed around 10:30pm.

The next morning, my son woke with a sore throat and aches and pains. Nice. I felt horrible for keeping him up. He stayed home from school and rested, but was no better the next morn. A trip to the doc revealed strep throat. Thankfully some meds and some more rest have him feeling much better this Friday. Unfortunately he has now missed three days of school. He DID enjoy the Twins game, made it to the big boards when I sent in a pic I took, and loved staying for the entire thing.

Holly's dad took the first one. The second one ended up on the big boards at Target Field. My daughter wasn't too happy about not being in that picture, but she wasn't even around when I took it. Oh well. She got over it! :) 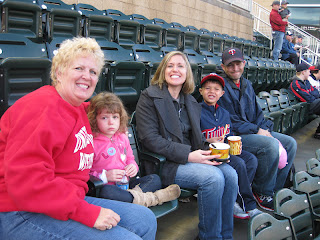 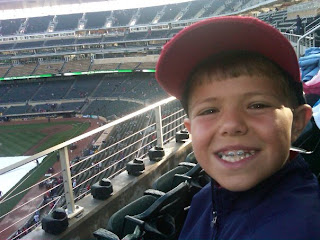 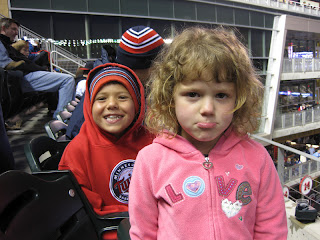 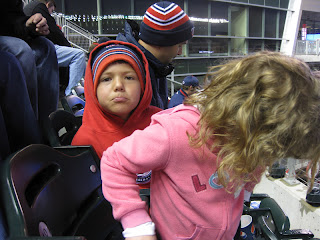